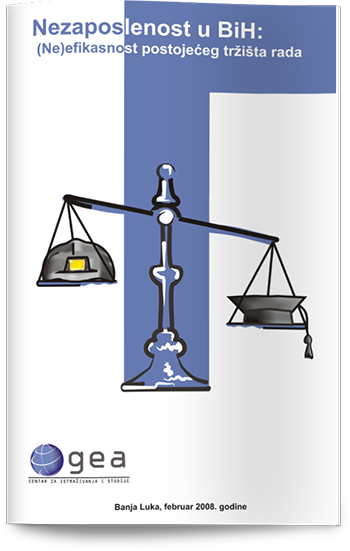 Unemployment in B&H: The (in)effectiveness of the existing labor market

The basic motif for starting this project is the problem of high unemployment rates in B&H, which, from the statistical aspect, represents one of the most certain indicators of poverty.

Although significant progressions and economic growth have been achieved in the field of macroeconomics towards the end of 2007, unfortunately these positive trends were not accompanied by the same results in the employment area. Therefore, a necessity emerged for a better understanding of the cause to this unfavorable development of events in order to reach the most effective solutions.

This project focused on the matter of efficiency of the existing labor market solutions and their compatibility in order to decrease the unemployment rates as soon as possible.

The project was divided into two phases:

The first phase consisted of development of three scientific studies, each one with specific theme segments of the project. Its aim was to provide a solid analytic database and to obtain the largest amount of answers as possible before the implementation of the second phase. Additional goal was to stimulate greater involvement of experts in public debates regarding the problem of unemployment.

The second phase consisted of organizing a round-table meeting assembling the representatives of all interest groups in the labor market such as unions, employers, the government, employment mediators, NGO sector, international community representatives, the media and others. During the meeting certain scientific studies were presented, which was followed by a thorough discussion among the participants. The studies mentioned, as well as the conclusions made at the meeting, constitute the publication published within the project implementation. Compilation, printing and distribution of this publication represent the final activities planned within the project.

The project is realized in cooperation with the Chamber of Commerce of the Republic of Srpska.

This project was funded, in part, by a grant from the U.S. Department of State “to support public education and training about market economy as well as economic development.”

The project was realized from January to February of 2008.