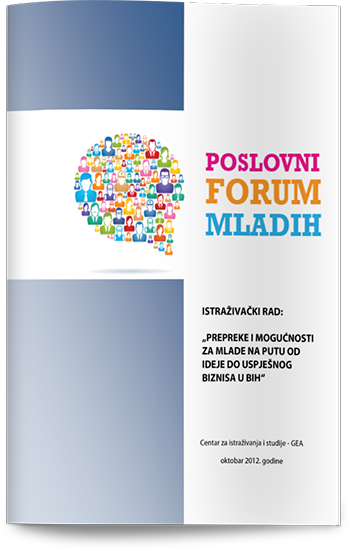 This research provides an overview of available programs of support in self-employment in the Republic of Srpska and Federation of B&H, including available international projects of support, an analysis of the influence that educational system has on making conditions for youth self-employment, as well as the influence of business surrounding on making an initial decision to start a business.

Even though youth unemployment rate in B&H is staggering 58% (according to the Survey on Workforce in B&H, from 2011), young people rarely try to resolve this problem through self-employment. A survey including students that participated in the “I Have an Idea” program has determined that basic reasons for which young people are so reluctant to start their own business in B&H are the lack of money, but also the lack of good business ideas and general disinterest for entrepreneurship.

Other findings of the study point to weaknesses in the existing system of education in terms of inadequate transfer of knowledge related to youth entrepreneurship, along with the chronic lack of possibilities for its practical application.

Unfavorable conditions for starting business in B&H additionally discourage young people in that sense. According to the “Doing Business” report by the World Bank, in 2012, B&H was ranked 125th country in the world based on conditions for doing business out of 183 world economies analyzes.

As for the existing programs of support in self-employment in FB&H and RS, only a small number of these programs is focused on young people as the main target group. For young entrepreneurs, this represents a significant drawback, because, in order to win some of the already limited funds or other forms of support, they have to compete against more experienced candidates.

Basic recommendations of this research document are as follows: