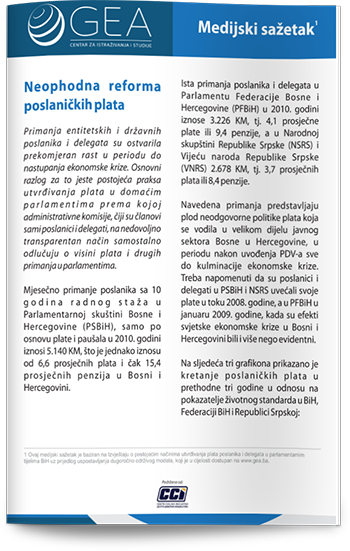 The earnings of state and entity MP’s and delegates have been increased excessively prior to the global economic crisis. Basic reasons lie in the existing practice of determining wages in the domestic Parliaments. Therefore, the Parliaments’ Administrative Committees, which are constituted by the MP’s and delegates themselves, determine the amount of wages and other earnings in the Parliaments in an insufficiently transparent way.

Monthly earnings of a MP who has worked for 10 years in the Parliamentary Assembly of Bosnia and Herzegovina (PAB&H), including only basic wage and lump sum, amount to 5.140 KM (1 KM = 0.511 EUR = 0.634 USD on 28th of May 2010), which is equal to 6.6 average monthly wages in the country or even 15.4 average monthly amounts of retiring allowance in Bosnia and Herzegovina! Similarly, in 2010, members of the Parliament of the Federation of Bosnia and Herzegovina (PFB&H) receive 3.226 KM on a monthly basis, i.e., 4.1 average wages or 9.4 retiring allowances. In the National Assembly of the Republic of Srpska (NARS) and the Council of Nations of the Republic of Srpska (CNRS), that amount equals to 2.678 KM, i.e., 3.7 average wages or 8.4 retiring allowances. For comparison, the amount of MP wages in other European countries analyzed in this Report (Norway, Germany, Slovenia, Latvia, Belgium and the European Parliament) does not exceed the amount of 3 average wages , including B&H’s neighboring countries – Serbia and Croatia.

This level of disproportion between the amounts of MP wages and living standard in B&H points to serious problems and drawbacks in the functioning of current models for determining wages in the domestic parliaments in order to obtain a more effective, fiscally responsible and long-term sustainable system. Consequently, the following recommendations that were based on good practices from parliaments of several EU member states, among other, were defined: