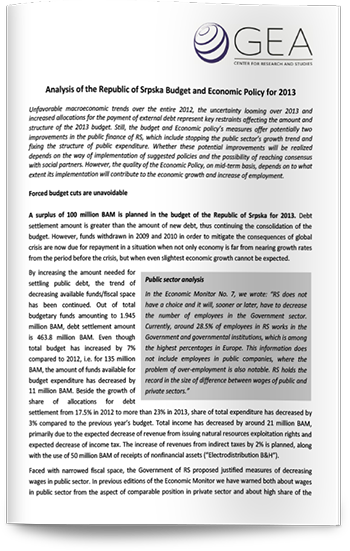 Center for Research and Studies GEA has made an analysis of the Republic of Srpska’s budget and Economic policy for 2013.

The end of 2012 was one of the most turbulent periods in RS since the beginning of the global economic crisis. Although the budget and economic policy have traditionally been a hot topic, last year’s atmosphere was additionally electrified by austerity measures, especially the 9% decrease of wages for some budget users. These cuts brought workers to the streets, which caused social dialogue to end with protests, unlike several previous years.

Unfavorable macroeconomic trends over the entire 2012, the uncertainty looming over 2013 and increased allocations for the payment of the external debt represent the key restraints affecting the amount and structure of the 2013 budget. Still, the budget and Economic policy’s measures offer potentially two improvements in the public finance of RS, which include stopping the public sector’s growth trend and fixing the structure of public income. Whether these potential improvements will be realized depends on the way of implementation of the suggested policies and the possibility of reaching consensus with social partners.

This was also arguably emphasized by representatives of business community, saying that it is not that important to what extent they would be pleased with the measures of the Economic policy for 2013, but that it is much more important how consistent will they be their implementation and realization in order to achieve the desired goals. The businessmen’s warning is completely logical, since economic policy measures were not implemented consistently during the recent years. Besides the unquestionable influence of the world economic crisis on economic trends in RS, the existing situation was significantly affected by certain factors on which the Government could have influenced to some extent.

Consistent implementation of the Economic policy measures is also important because of the current difficult economic situation, since RS will enter into recession in 2013, largely caused by the downfall of industry, agriculture and construction. During 2012, foreign trade deficit increased together with the unemployment rate and number of pensioners, additionally complicating the economic situation. State in the financial sector is somewhat more favorable, thanks to trust in Convertible Mark, while the high share of low quality credits in total distribution, especially when it comes to agriculture credits, remains the biggest problem.

Serbia and Croatia, as our most important foreign trade partners, are facing similar challenges, and the recuperation of the entire region will largely depend on the movement towards the EU.