Workshop: “Creation of jobs and prosperity” for the Western Balkans

In Tirana (Albania), on May 6-8, 2015, GEA participated in the workshop “Creation of jobs and prosperity”, which convened representatives of civil sector from the Western Balkan countries. The workshop was organized by Friedrich Ebert Stiftung as support to the so-called the “Berlin process”, which implies international dialogue on the integration of the Western Balkans into the European Union and other related topics.

The “Berlin process” will continue this year on an international summit in Wien, planned for August, while in 2016 the same summit should take place in Paris. 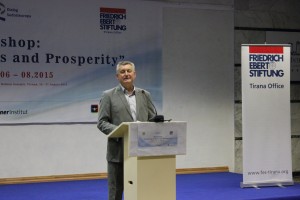 The workshop was aimed at enabling civil society representatives from Albania, Bosnia and Herzegovina, Macedonia, Montenegro, Serbia and Kosovo* to define and formulate the most important messages on the subject of job creation and prosperity in the Western Balkans that would be delivered to highest ranking officials from these countries, but also from Germany, Austria and other countries at this year’s summit in Vienna.

At the workshop it was interesting to hear that countries from the region shared a number of similar problems, such as high unemployment rate, ineffective public sector, corruption, halt and lack of coordination of reforms in many areas, etc. The expectation is that, by June, workshop participants will agree on a brief document (up to two pages) that will include the most important messages on what has to be done in order to enable the creation of new jobs and prosperity development in the Western Balkans 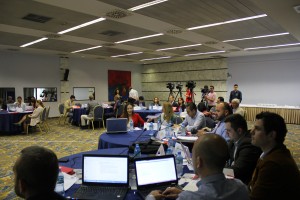 Some of the reform suggestions a lot spoken about at the workshop included the education reform based on the labor market needs, the development of active employment measures, entrepreneurship promotion, the improvement of conditions for small businesses start-up, the formulation of policies for better use of local comparative advantages and creation of higher degree of added value, the improvement of regional cooperation and sector networking, but also the increase of the level of transparency and democratization in decision-making processes in all countries of the region.

*according to the United Nations Security Council Resolution number 1244.