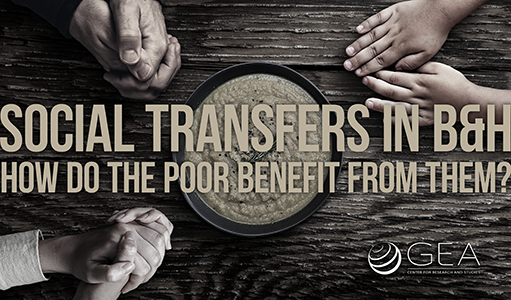 Social transfers in B&H – How do the poor benefit from them?

Existing financial programs of social protection in the Federation of B&H and the Republic of Srpska cost a lot and contribute little to the improvement of the status of poor households.

If we consider all social transfers (pensions, veteran allowances, welfare, allowances for persons with non-war related disability, children’s protection allowance, etc.) on which B&H annually spends more than 4 billion BAM, only slightly more than 15% of these funds goes to the poorest one-fifth of the population while more than 25% goes to the richest fifth. Thereby we find ourselves in an absurd situation in which financial programs of social protection actually increase income inequality in the society instead of decreasing it. Basic reason behind this is the fact that most social transfers are approved based on the status and not on determined social position, i.e. actual need.  Among all social transfers only continuous and one-time financial assistance and most of the allowances for children are conditioned with property and income census, i.e. are directed to the poor. However, total expenditure on allowances directed to the poor is very low (e.g. in 2014 in the Republic of Srpska, only 7.9 million BAM was spent on financial assistance), so it does not change the fact of poorly directed total social transfers to the poor. This is caused by restrictive legislation defining the conditions for obtaining the right to financial assistance and extremely low defined amounts of these allowances. Some real-life examples considered in this research illustrate this problem:

These examples prove that received financial assistance was not sufficient to help these families exit poverty.

Generally, poverty is highly present in B&H: estimates are that 23,4% of the population spent less than 238 BAM a month in 2011, meaning they were below the “absolute poverty” threshold according to the methodology of the Agency for Statistics of B&H. Even though different methodologies for poverty measurement give different results and cannot be mutually compared, all findings point to a high rate of poverty in B&H, and most of them reveal an increase from 2007 to 2011 (years with detailed data from household expenditure surveys). According to all methodologies, there are more poor children than poor adults and this rate is increasing. According to the same methodology of the Agency for Statistics of B&H, the percentage of poor children from 2007 to 2011 increased from 26,2% to 30,5%. Poverty is more frequent with multi-member families – as high as 40% of children in households with two or three senior members are below the poverty threshold. Due to great differences in education profiles of people in rural and urban areas, poverty is much more present in villages, where three quarters of all poor children live. Everything points to the need for reconsidering all social programs, especially those with the greatest distribution of funds to the richest segment of our society. If 20% of “non-contributory” transfers costing the budget more than 1 billion BAM annually go to the wealthiest one-fifth of the population, then it is not difficult to assume how much it would be beneficial if this practice was abolished or significantly decreased. On the other hand, it is necessary to enable social programs truly fulfill their core purpose – helping those in social need. Therefore, these programs must be better directed and more charitable to our most vulnerable citizens. To achieve this, it is necessary to initiate sincere public debate on the subject and the role of the current government is essential for the process. We emphasize this because some of the existing social programs, such as allowances related to veterans, are “sensitive” topics in political terms. Having in mind obligations taken by the government within the Reform Agenda and IMF program, it appears it is more and more difficult to postpone this issue. It would be useful if all public debates related to financial welfare programs began with these questions: What is the basic purpose of this program? What is the profile of the users of the program? Which portion of program funds goes to the poor and which one to the rich? How effective the program is in the realization of its purpose? Are the planned and realized effects a priority of public interest?