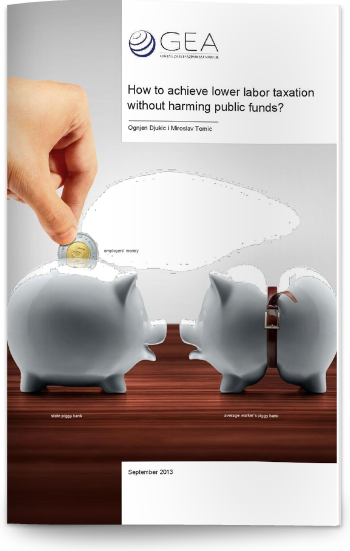 How to achieve lower labor taxation without harming public funds?

The announcement by the Government of the Republic of Srpska to introduce a 200 BAM tax-exempt portion of wages is surely a welcome measure. This tax exemption is clearly insufficient, however, when we consider policies being adopted by neighboring and EU countries in their attempts to tackle the dire state of the labor market and macroeconomic trends.

This study investigates one of the key policy measures needed to improve labor market conditions in RS and FB&H – decreasing the income and contributions tax burden.

We document how the short-term income loss that would result from the tax cut can be compensated through indirect taxation, thereby maintaining or even decreasing the total tax burden. Called “fiscal devaluation,” this policy measure simulates the effects of national currency devaluation by lowering domestic workforce costs while increasing consumption (for example VAT) taxes, causing a rise in the price of imported products and services.

The “tax wedge,” or the difference between labor costs to the employer and the corresponding net take-home pay of the employee, is around 40% in both FB&H and RS – significantly high when compared with that of many countries. This means that from 100 BAM paid by the employer for one registered employee, only 60 BAM is given to the employee directly. The tax burden for low wage labor is among the highest in Europe.

Prompted by increasing levels of unemployment and the need to boost international competitiveness, countries in the region including Croatia and Serbia have already decided to adopt “fiscal devaluation” – policies to decrease labor taxes while increasing consumption taxes (for example VAT). Such policies tend to prompt currency devaluations due to falling domestic workforce costs and rising costs for imported products and services. These measures are considered to be especially effective for countries with fixed exchange rates and single VAT rates. B&H is one of the few countries that meets both these conditions.

According to calculations based on 2012 data, a mere 1% VAT rate increase would generate up to 186 million BAM of additional public revenue in B&H. It would thereby be possible to implement a 5% labor tax rate cut in FB&H, for example, and a 300 BAM monthly wage tax exemption. If revenues generated from the VAT tax increase were used to reduce the tax burden for one third of all employees with the lowest wages in FB&H and RS, it would be possible to lower their tax wedge by more than 9%. That would enable an increase in their net wage of over 16%, while labor costs for the employer remain the same.

Decreasing labor taxes proportionally to a 1% VAT rate increase is only given as an example here. We recommend serious consideration of decreasing taxes and contributions on wages beyond the income neutral level as well. This would be possible if, besides the increase of income from VAT, one portion of funds needed for such reform would be ensured through fiscal savings.