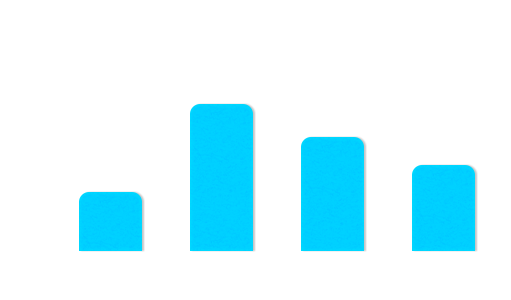 A decrease of the social contribution rate by 1.4 percentage points announced – is it enough?

The “Law on changes and amendments to the law on social contributions” to be considered at a special session of the National Assembly of the Republic of Srpska on March 4th 2015.

According to a set of laws to be considered on March 4th at the 7thspecial session of the National Assembly of the Republic of Srpska, the total social contribution rate will decrease by 1.4 percentage points (health insurance rate by 1p.p., children’s protection contribution by 0.1 p.p. and unemployment insurance rate by 0.3 p.p.). Thereby, the total tax burden on labor decreases to 36.9% in relation to the gross wage. In its explanation, the Government of RS states that the aim of this income tax decrease is to “create optimal tax burden and to support the expected growth of economy, increase of employment and economic development of the Republic”. Will this step actually result in an optimal labor tax burden, and how much can it contribute to economic growth and an increase in employment?

If we examine the overall labor tax burden (the “tax wedge”) over the past five years, the first thing that strikes us is that – until 2011 – this burden was lower than the overall taxation amount we currently face, even with the recommended changes. Namely, until February 2011, the tax wedge had been 35.7% of the average gross wage in the Republic of Srpska. It then jumped to a record-high 39.7% and maintained that level until February of last year, when the tax-free portion of income was introduced again, decreasing the tax wedge to the current 38.2%.

By implementing the suggested “Law on changes and amendments to the law on social contributions,” the gross wage tax wedge would decrease to 36.9%, which would still be 1.2 percentage points higher than before February 2011. Therefore, in the 2011-2015 period, there was one increase, one decrease and now an announcement of another decrease of the tax wedge that brings its level close, but still above the initial level, which can be seen on the graph below. 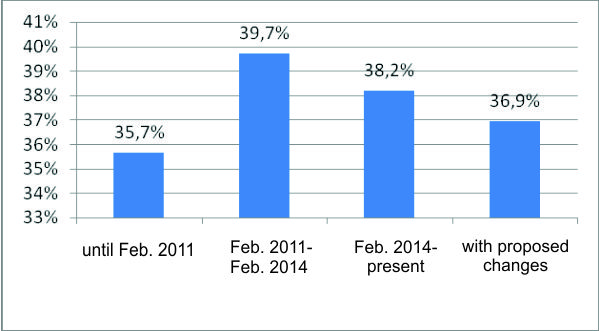 The conclusion is that, while the recommended social contribution rate decrease by 1.4 p.p. is welcome, it does not represent a significant change in the labor taxation of the Republic of Srpska. It only removes one portion of the additional tax burden introduced in February 2011, when the tax-free income portion of 250 BAM was abolished and when income tax increased from 8% to 10%, along with a total social contribution rate increase from 30.6% to 33% of the gross wage. In a way, this measure is a sign of a continual vicious labor tax policy circle going repeatedly round and round, following a framework set by previous domestic labor taxation policies.

GEA has repeatedly written about the significance of income tax burden relief for the Republic of Srpska and the Federation of B&H, pointing out the consequences of the current situation as well as possible alternative sources of revenues and possible savings. Once again, we point out that much greater tax decreases are needed if we hope to see a boost in employment and economic activity. This conclusion is further supported by the official recommendation of the European Commission to all EU member states to decrease labor taxation, which has been grouped with taxes that have the most damaging influence on economic growth. Even in Europe, there are countries with significantly lower tax wedges, such as Switzerland (19.2%), Ireland (21.1%) and Iceland (28.7%), but also Croatia (30.4%), Montenegro (33%) and Bulgaria (33.6%), not to mention countries outside Europe: USA (29.3%), Israel (20%), Korea (19.8%), New Zealand (16.9%), Mexico (15.5%) and Chile (7%!).

Therefore, we recommend a new approach to tax policy in the Republic of Srpska, with greater income tax relief and an appropriate increase of other taxes with less damaging effect on economic growth and employment.

To be able to claim that income tax relief is substantial, the tax wedge must decrease to a level significantly below the level prior to February 2011, when it was 35.7% of the gross wage. For example, a 33% tax wedge would represent a true turnaround and important structural reform that would positively impact the economy and developments at the labor market.